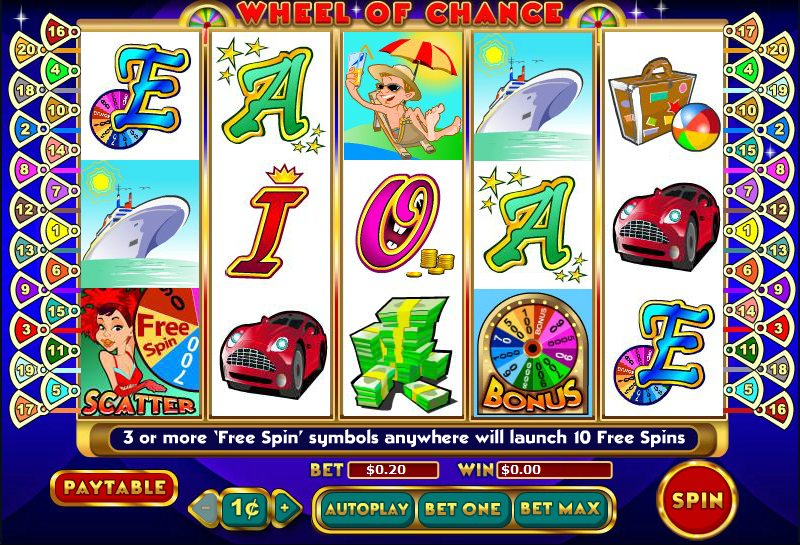 Spin the prize wheel, spin it again, keep going until you don’t want to chance it. That’s how the bonus round in Wheel of Chance 5 Reels works. Patterned after Wheel of Fortune, this bonus slot has a lot going for it.

When diamond wilds are part of your winning line, your prize doubles. That means any of these prizes would be worth twice as much.

The final paying symbol is the free spin scatter. It pays 2 to 500 times your total bet. It’s also one of the ways to trigger a bonus feature.

How the Two Bonus Rounds Work

Three or more of the free spins scatters on the reels triggers the free spins bonus round. In this bonus, you start with 10 free spins, which can be retriggered with three additional scatters. The 10 free spins all have a 3x multiplier in place. That puts the highest prize of 8,000 coins with the diamond to a staggering 24,000 coins or $240,000 if you’ve set the coin value to $10.

The other bonus is the Bonus Wheel feature. To trigger this bonus feature, you need the Bonus Wheel symbol on the second and fourth reels on an active payline. If this happens, you go to the bonus game. In the Wheel of Chance bonus, there’s a reel full of cash prizes and stoppers. Spin and win cash on the first spin. After that, “Bust” spaces are added to the wheel. Keep going if you dare, but if you hit a “Bust” space, you lose everything.

Options Allow You to Customize the Game to Your Preferences

What else should you know about this bonus slot? There are 20 paylines in all. Betting options include the coin value (1 cent to $10) and the number of paylines you wish to activate. After that, you spin the reels and see what happens. To speed up gameplay, you can stop a spin.

All it takes is three free symbols to kick off the free spins bonus. The bonus symbol triggers the prize wheel bonus. It’s time to win. Spin the reels on Wheel of Chance 5 Reels now. Good luck!