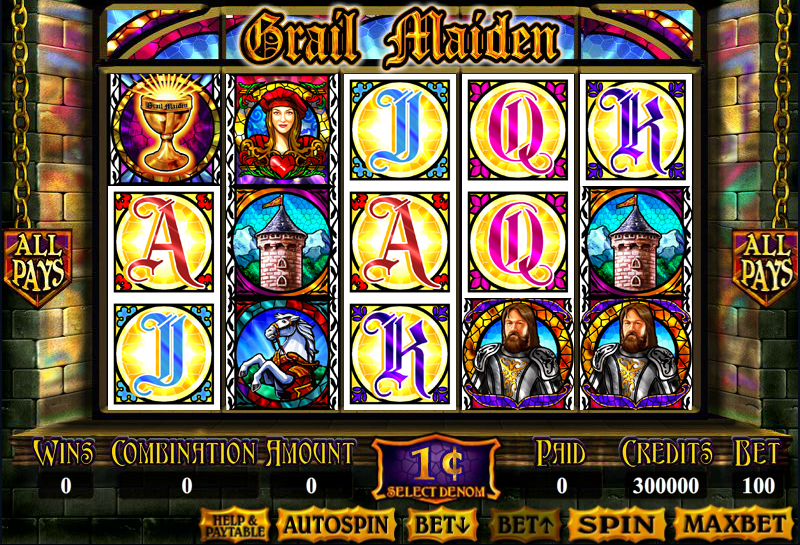 Explore the realm of the Dark Ages playing Grail Maiden, a 5 reel bonus slot that finds King Arthur on his quest for the Holy Grail. Get three or more matching symbols across the reels in order to win a prize.

Payouts vary depending on the symbols. Access the paytable for the full range of prizes. In general, the paytable starts with low-paying symbols like the 9, 10, Jack, Queen, King, and Ace. The 9 and 10 pay up to 100 coins, but the Ace is more valuable with a top prize of 250 coins.

The Tower is better with a top prize of 500 coins. The Stallion and Black Knight are even better, with a payout of up to 750 coins. One symbol is better than all of the others. The Maiden is the game’s highest-paying symbol and awards as much as 1,000 coins.

The Value of the Grail Wild and the GM Logo Scatter

The Grail symbol is found on the second, third, and fourth reels. When it appears, it’s also wild. It replaces symbols other than the GM logo that’s the game’s scatter.

The GM logo appears as GM in front of crossed swords. When three, four, or five of them appear anywhere on the reels, you win a prize of up to 50 times your total bet. With a max bet, you’d win $50,000.

When you achieve this, you activate the bonus round. Win five free spins where all Grail wilds are expanding. The expanding wild reels freeze and remain on the reel for the remaining free spins. Five additional free spins are awarded if you get a Maiden and Knight on the first and fifth reel.

Grail Maiden is an easy-to-play bonus slot with 5 reels and 20 paylines. Betting options start at a penny, so you can play without spending much. High rollers can spend up to $100 per spin with the max $1 coin and a wager of five coins per line. Spin the reels on this Medieval-themed slot game and experience why players love it.